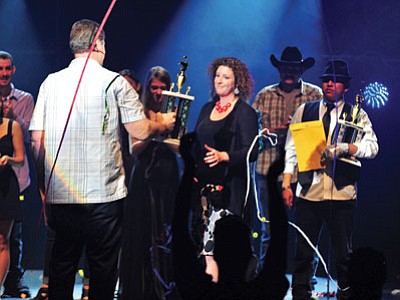 "Erin Johnson sang her way to the top Thursday night and became the Prescott 2014 Idol in the grand finale of summer-long competition at the Yavapai College Performing Arts Center," writes Karen Despain in today's The Daily Courier.

"In general, I am a musician," Johnson said in The Courier. "I love all music, and I try to to teach my kids to experience as much music as they can — all realms. That's what it's all about."

Johnson sang "Alone," made popular by Heart, to win the contest. The finale performance was held at Yavapai College Performance Hall in Prescott, Ariz. Attendees filled nearly all the 1,200 seats.

"It's the biggest audience I have ever performed for," Johnson said. She has actually performed for a much larger—if more raucous—crowd when she conducted the Tiger Pep Band in front of 7,300 football fans at the 2001 Battle for the Monon Bell between DePauw and rival Wabash College.

In addition to directing that ensemble, Johnson also played basoon in the DePauw University Band.

Despite the vocal talent Johnson exhibited Thursday at the fifth annual competition," writes Despain. Johnson's "specialty is the bassoon, and she plays with a variety of local ensembles, including the Central Arizona Concert Band, Prescott POPS, Prescott Strings, the Chamber Orchestra and the Prescott Chamber Players."